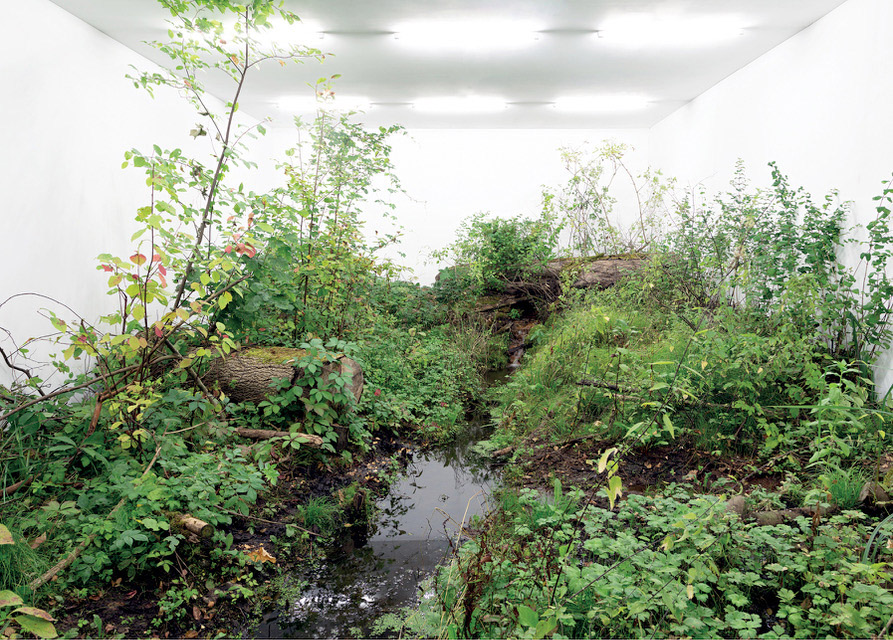 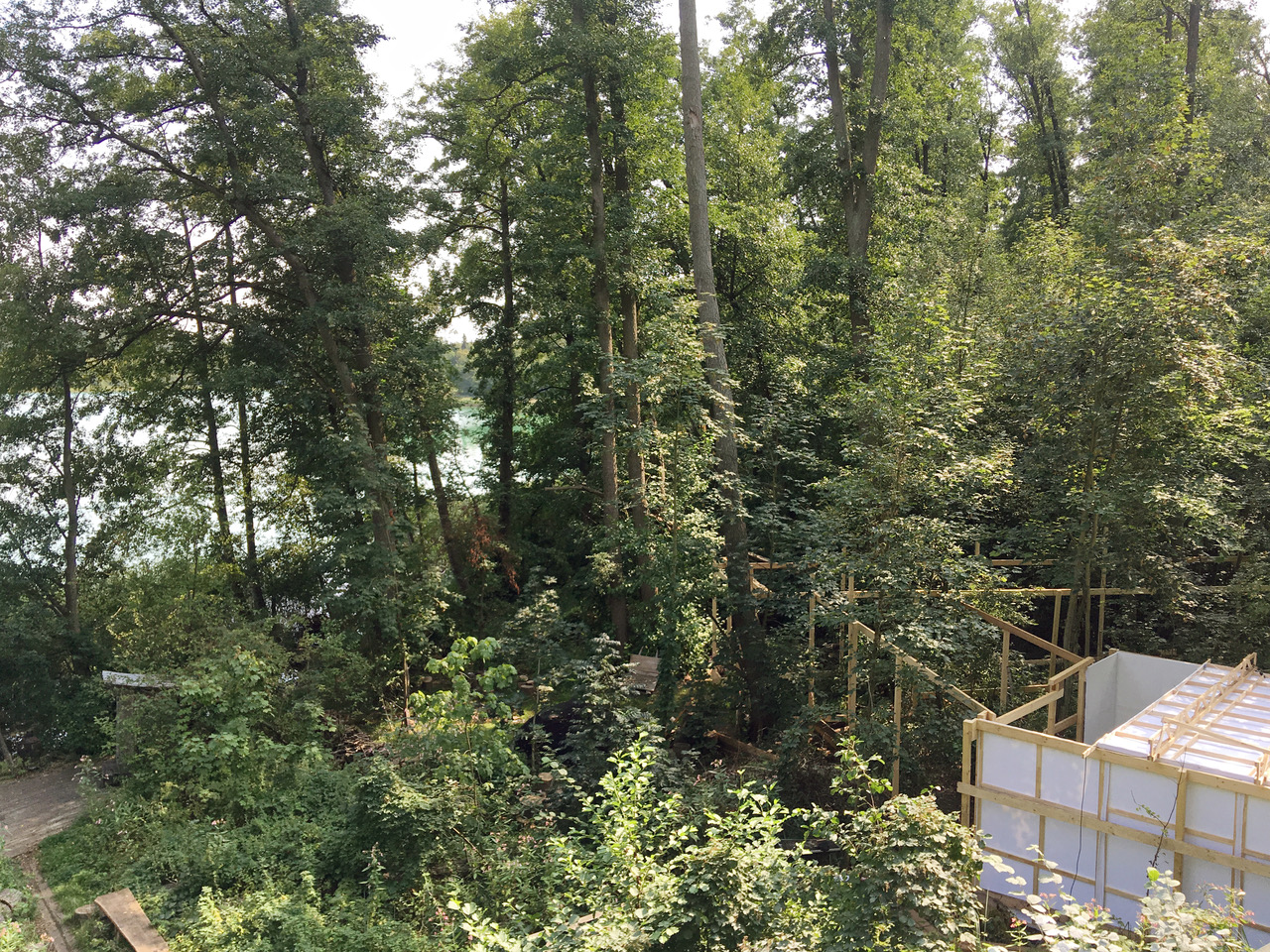 Forest of the Real

At 52°33’44.1”N 14°03’12.8”E, a precise Global Positioning System coordinate provided by Google Maps, the blindfold is removed. As you warily tread the muddy ground, your eyes adjust to bright white fluorescent light. A trickle of water catches your ear. You arrive, surrounded on all sides by windowless white walls, in a truncated thatch of forest. The smell of damp earth slows your pace as you navigate the terrain of fallen logs and low growing shrubs. Venturing beyond the first enclosure, a well-trampled corridor opens onto another white-walled room. The sound leads you along a stream fringed by greenery towards a small waterfall, whose pool offers a rippling reflection of the harsh ceiling lights. Every leaf is thrown into sharp relief against the saturated hues of the forest floor.

ISOLATION by Fabian Knecht is a series of artworks staged within a white-cube gallery space built up around specially selected sites. At first glance, the images appear to photos of galleries filled up with landscape installations. One thinks of Walter de Maria’s Earth Room (1977-present), or Olafur Eliasson’s Riverbed (2014-15), to which Knecht has previously referred in a visual essay about the origins of the series. But in fact, the large format photographs makes of actual ground a figure, like a sculpture in a room, inviting viewers to attend to it with heightened care. At each of the selected sites, a fluorescent lit white box is dropped atop a rectangular swatch of land—a fragment which, decontextualized from its surroundings, evokes its own set of associations, analogies, desires and anxieties. The boxed scenes vary and trick the eye. A luscious field of wildflowers recedes into infinity in perfect one-point perspective. In another circumstance, the flat ground is strewn with trash. A snow-covered stretch of a piled-up ice flow is clearly selected for its resemblance to Caspar David Friedrich’s iconic Eismeer (1823/24). One wonders how far the artist and his crew had to wander the Russian winter in search of that vantage point, how his eye had to squint, and how the camera had to be trained at just the right angle, height, and time of day, to catch the resemblance (without overemphasizing the identity between the scenes). This is not a matter of matching found landscapes to familiar scenes from paintings or historical photographs. In Isolation we are presented with the workings of a frame by means of the scenes that they enclose.

Indeed, beginning with an isolated fragment of a landscape, the logic of the frame echoes outwards—the structure built around it, the frame of the camera viewfinder, leading to a photograph of its interior; the frame of the photograph (with its own reflective glass surface), now hanging on the white wall of a gallery—whose form is repeated ad nauseum in the temporary architecture of the art world, from fairs and biennales to museum shows. But the mis en abyme runs inward too: in one work from the series, created at a grassy swamp outside Berlin, the box-frame’s fluorescent lights are reflected in the water below. Adding another dimension to the image, this mirror effect amplifies the logic of Isolation, with the swamp’s still water mimicking the photographic enterprise and the image-culture of the gallery world. In Water and Dreams (1942), Gaston Bachelard describes reveries afforded by ponds, lakes and rivers, in whose reflective surfaces the sky itself contemplates its own image. In Knecht’s transfiguration, the sky becomes a ceiling, the sun, rows of fluorescent bulbs; and the water, a photograph recording the self-reflexive narcissism of the gallery space.

Yet Knecht’s re-framing sequence does not end here. Previously, vitrines full of smaller photographs depicted the ‘making-of’ the studio architecture from a distance, so that its exterior walls were shown surrounded by a much larger landscape. Functionally, these behind-the-scenes images reversed the gestalt, rendering the terrain ground again, while turning the built object into a (diminished) figure. The cumulative effect of so many distancing mechanisms destabilizes the viewer’s relation to photographic truth-telling, transforming it into a problem. Or does it? Such destabilization might suggest that Knecht is provoking the viewer to doubt the veracity of everything they are seeing—in the work and the world. If the gallery isn’t real, perhaps neither is the interior landscape. Perhaps it is a digital confection, small-scale model, or terrarium. The specter of deep fakes, scripted reality, and ‘alternative facts’ casts a familiar chill here. It bears remembering that by its very nature the frame or “parergon is a form which has as its traditional determination not that it stands out but that it disappears, buries itself, effaces itself, melts away at the moment that it deploys its greatest energy.” However, in keeping with contemporary ungroundings of the reality principle at work in mass culture, the pleasing detail and smooth packaging of an Isolation print also swings the other way. It is compatible with an entirely different viewer relation: conveniently, what was once an unpalatable corner of a brownfield site, its rutted dirt and tufts of grass, is now ready to be swallowed in its photographic candy-coating. Which is to say, the viewer can take the apocryphal ‘red-pill’ of the virtual reality culture war, served on a clean white plate, and enjoy the colourful whatever-it-is (shunning the ‘blue pill’ of a harsh encounter reality). They key is that the image is consumable.

Problem/What problem? In setting up tension between a deeper question and, alternatively, its pleasing sublimation, Knecht’s series stages the conflict between Brechtian episches Theater and its rightward-leaning antagonist, the total illusion of the Wagnerian Gesamtkunswerk. In order to conserve the phenomena that resonate within its walls, the theater’s own architecture must resist exposure.

The box is also a shelter. Knecht opened Isolation to visitors for the first time at his solo show at Kunstverein Arnsberg (Radition, 2017), where the mossy remains of a dead tree took center stage. Subsequently, at Kunsthalle Baden-Baden’s “Exhibiting the Exhibition” (2018), rather than a sprawling landscape in miniature, visitors confronted with a single closely cropped tree trunk. With this ‘live’ iteration, landscapes are transformed into the Great Indoors. Knecht’s newest variation of Isolation—his largest yet, incorporating three connected galleries for a combined 180 sqm—is set within the Märkische Schweiz national park. Just across the lake is the Berthold Brecht house, whose one-time owner’s contribution to drama foregrounded the perspectival nature of audience experience, creating works that encouraged viewers not to suspend their disbelief in what they were seeing (as part of the episches Theater tendency). It is, one imagines, with him in mind that Knecht’s Buckow intstallation deploys its own Verfremdungseffekt. Until this moment, despite a critical edge, the series has mostly performed at a degree of distance from the audience. The landscape-figure remains fully isolated within three gallery walls and closed in by the fourth wall of photographic re-presentation. By virtue of their medium, even the supplementary ‘behind the scenes’ photos (which reverse the perceived enclosure) operated at a distance. In Buckow, Isolation categorically puts the viewer into the picture, both figuratively and literally. Ironically, through this embrace of epic ‘total installation’ (which completely surrounds the viewer), Knecht’s spectacular project stages an exit from Wagnerian gesamtkunstwerk and its 21st century counterpart, the filter bubble. Indeed, dramatic emphasis proceeds from the visitor literally taking leave of art(ifice)—moving through the artwork out into the world.

As mentioned, during the vernissage visitors are blindfolded and led into the constructed space—dropped into the architecturally framed landscape in media res, without having seen the structure or its surroundings from the outside. This is quite the opposite of a normal encounter with an artwork, where one approaches a proposed world and attempts, imaginatively, to penetrate its milieu. Here, after the blindfold is removed, the visitor explores the inside of a frame wherein everything is offered up for pleasure and contemplation, whether or not they are amendable as such in reality. (Perhaps mud is getting into your shoes; perhaps you oppressed by the white lights, or harassed by insects.) Now comes the crucial moment: however the teleported visitor relates to the situation, they must eventually emerge from it, into a beyond. The must leave the structure. In a reverse telescoping effect, it seems that Knecht’s box frames everything outside it too. Every tree and puddle surrounding the structure become benefactors of a heightened psychological investment in twigs, leaves, etc. How long will it take for this uncanny perspective on the world beyond the artwork to wear off?

It must be noted that Buckow is also known for guided, intensive experiences of terrain that are meant to be curative. Indeed, it is home to a number of paths designed in accordance with the naturopathic philosophy of the an eighteenth century monk Sebastian Kneipp, who espoused the virtues of bare-foot walking through ice cold water, dewy grass and mud. This type of practice of is less about the appreciation of nature or landscape (as an object of value) than it is about being physically and spiritually transformed by it. One might ask after the contraction of Kneipp and Brecht, how many steps can the visitor take away from the white box before they lose that special mode of attention proposed by Knecht’s cure? 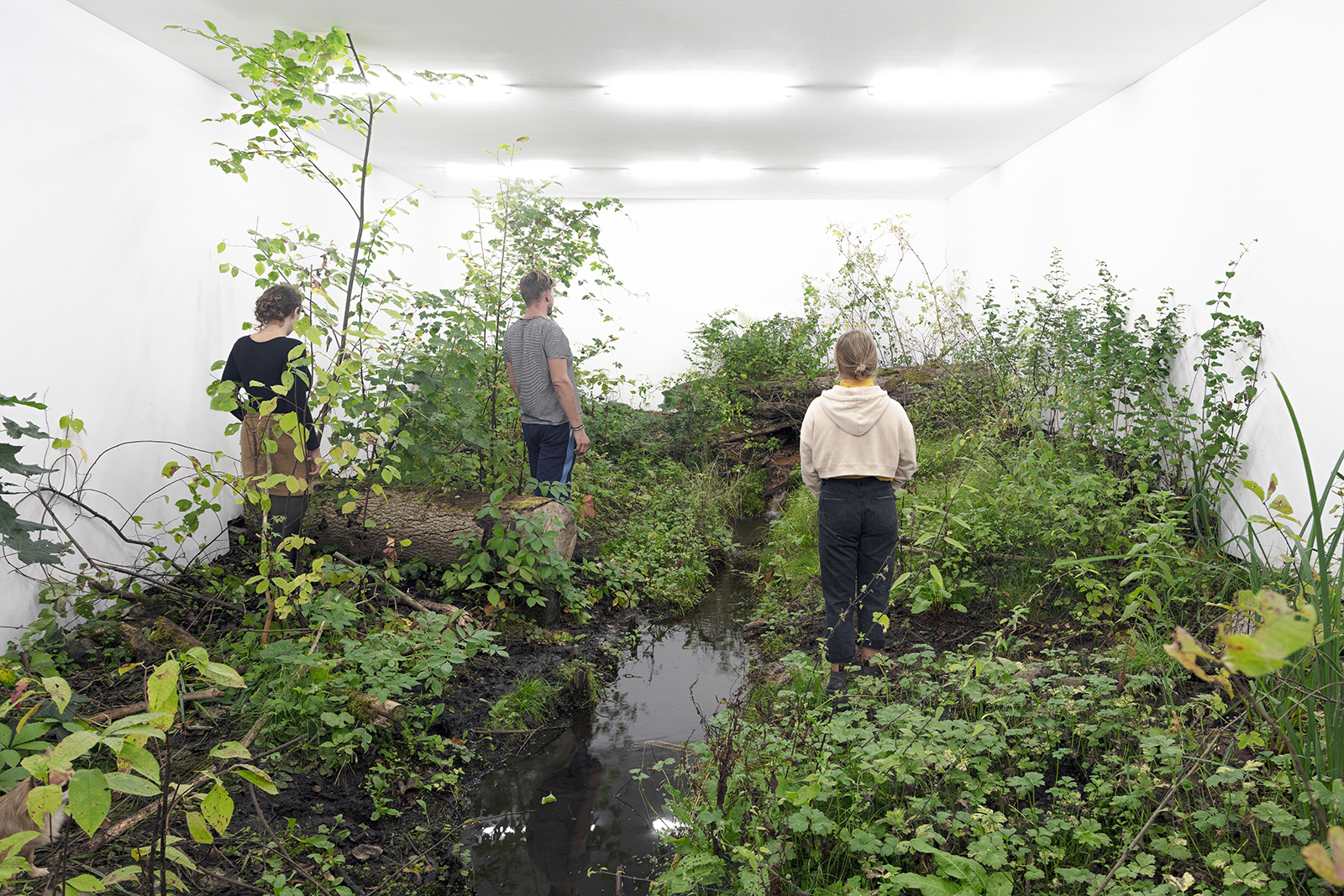 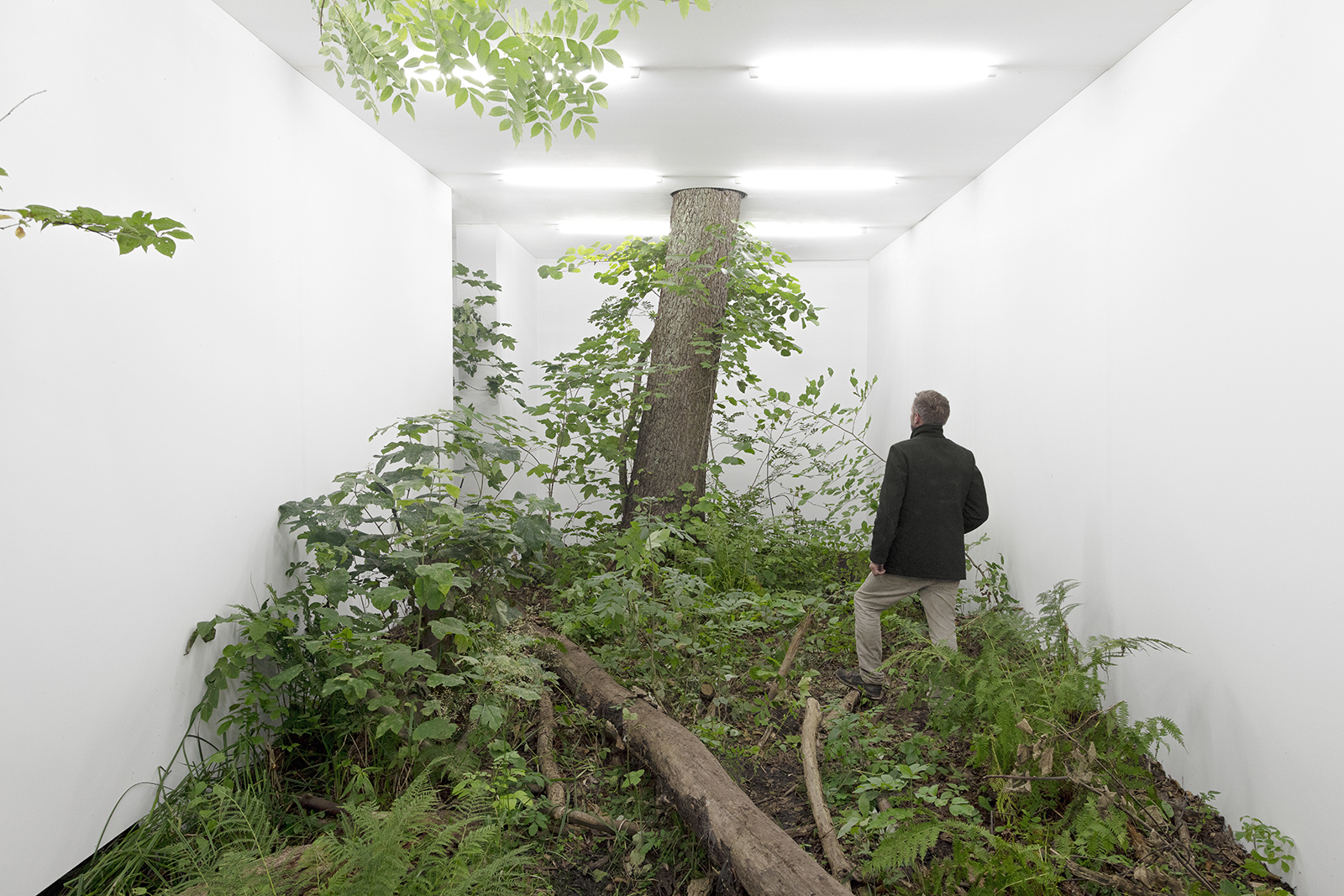