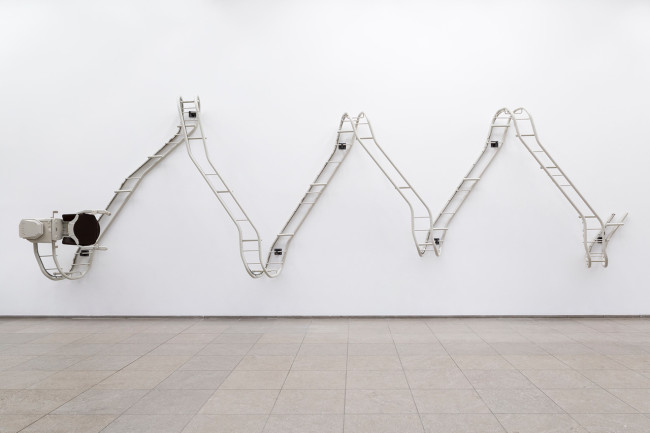 The group exhibition reflects on the notion of observation from an influential group of young artists who participated in the INSTITUT FÜR RAUMEXPERIMENTE led by Olafur Eliasson from 2009 to 2014. This is the second instalment of artworks complimenting the projects premiere presentation at Art Düsseldorf 2017.

The dream of grasping phenomena in their own language has long animated scientific endeavors, offering an irresistible provocation to the arts. A spatial experiment itself, the open-format exhibition showcases work by Malte Bartsch, Julius von Bismarck, Julian Charrière, Andreas Greiner, Clara Jo, Felix Kiessling, Sophia Pompéry, Macarena Ruiz-Tagle, Nina Schuiki, Matthias Sohr, Dan Stockholm, Alvaro Urbano, and Jonas Wendelin. Observation and experiment are typically treated as diametrical poles of experience. In contrast to the passive innocence and receptivity of observation, experiment carries the connotation of action, intervention and manipulation. And yet experiments are frequently contrived for the precise purpose of rendering phenomena observable that would otherwise fall outside of the range of our sensory perception or technological detection. Particles are scattered, model organisms are bred, dyes are released in bloodstreams and waterways in order to reveal latent images and trigger our capacity to notice possible configurations of the world.

Consistent with Eliasson’s demonstrative insistence that experience is in each case yours and yours alone, alumni of the institute exhibit an exquisite sensitivity to the way that experiments at once rely on and cultivate distinctive observational dispositions. Stockholm’s performative process of palpating the architectural surface of memory preserves a deeply intuitive sense of touch, while Greiner’s bottomless empathy serves to infuse non-human beings with outsized stature and significance. In Charrière’s and Ruiz-Tagle’s work, the calibration and choreography of bodies, devices, and environments is amplified, stressing the affective agencies active in observation. Such an attentiveness to time frames, measuring devices, and social configurations discloses strange affordances to Kiessling’s, Sohr’s, Wendelin’s, and Bartsch’s eyes, while von Bismarck consistently embraces within his own body the violence of provoking the world with his penetrating gaze. In the work of Urbano and Schuiki, shadows, gusts of wind, and rays of light are arrested in their path as if noticed by the peripheral vision of the walls themselves. Activating perspectival alternatives to the manner in which spaces and objects may perform for the camera, Jo proliferates politics of observation and calls them into dialogue. In this group’s relentless play with grounding and ungrounding practices of observation, Pompéry’s images and apparatuses seem to invite viewers to question whether they can believe their own eyes. Caught in the act of observing and being observed ourselves, our capacity to distinguish between reality an illusion is tested—and with it our desire to touch a world beyond that of our own making. At once a retrospective and a promise of interventions to yet to come, BEOBACHTUNG presents a powerful set of afterimages of the Institut für Raumexperimente.

The above text excerpt is contributed by Dehlia Hannah. A full exhibition catalog for BEOBACHTUNG with an additional essay from Hannah will be available at the gallery in December 2017.