NOWs: house of bone body of stone by Dan Stockholm 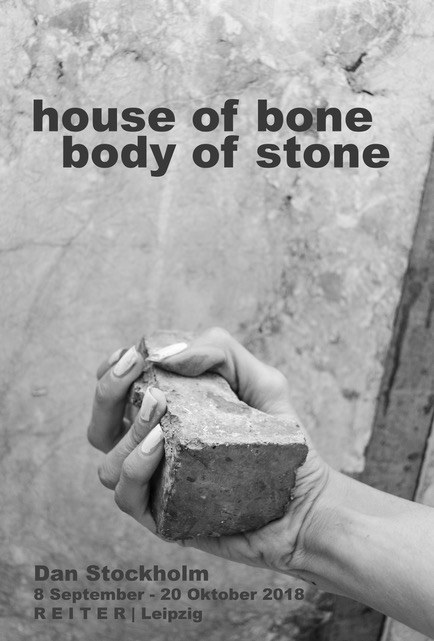 house of bone body of stone

REITER galleries is proud to present House of bone body of stone a solo show by Dan
Stockholm.

Fascinated by places and architecture with an innate historical significance and narrative
tension, Dan Stockholm practices a “creative archaeology”, which includes field research
and work with various findings. His recent work evolves from what he calls “performative
process,” a method that turns the finished piece into a vessel which carries the story of its
own making.

Stockholm uses sculpture as an interface, link, or passage through which places and
bodies – across temporal as well as spatial distances – are set in relation to each other.
Architecture is a frequent reference point of his work, as he centers on on the conceptual
fields of present and past, presence and absence, fleeting and enduring. Thus, objects
which emerge in different temporal moments are concentrated. They begin to embody the
analogy of the inscription of light traces in the photographic negative that maintain an
indexical relationship to the past. It serves as sculptural containers fixing a presence like
an imprint and so transposing the sculptural object into the present even when it is only a
fleeting glimpse that materializes so enduringly in this way. Stockholm’s understanding of
sculpture as a medium of storage and transmission, driven from his archaeological
interest, is clarified in his work HOUSE.

The process for HOUSE began in 2013 only days after his father’s death, when the artist
in a three-day performative and almost ritual fashion methodically touched the exterior of
his father’s entire house centimeter by centimeter. The process ends with Stockholm
translating this act of touching into object form by producing a number of negative plaster
casts of his hands. The casts are fixed by metal rods, which simultaneously offer protective
anchorage and oppressive restriction. Metal scaffolding connects the floor and ceiling of
the exhibition space and serve as displays for his organic plaster sculptures.

HOUSE is supplemented by the film Don’t think about death a filmed performative
interaction where inhabitants of Damascus use a collection of architectural fragments of
their city as tools to create drawings directly on the ground. Don’t think about death is
made in collaboration with Syrian artist Nourhan Sondok. In spite of the dangers faced in
Syria, Nourhan has been collecting architectural fragments from all over Damascus. The
fragments are compiled from a wide spectrum of constructions: from 4000-year-old
columns; to newly constructed buildings destroyed in the Syrian conflict. Stockholm and
Sondok met on social media, and from behind their screens in Copenhagen and in
Damascus, their correspondence also led to the work Untitled (Fragments, Damascus
2017) a photo series and archive of images showing Nourhan’s hands handling the
fragments used in Don’t think about death.

Also on view in the show is the interactive site specific glass work: Level (Blue Mare,
Königsblau). Trapped between two panes of glass, colored ink changes its form and
concentration according to the tilt of the exhibition space and the movement of the
audience who are invited to walk on the glass.