NOWs: We Close our Eyes and See a Flock of Birds by Ivana Franke 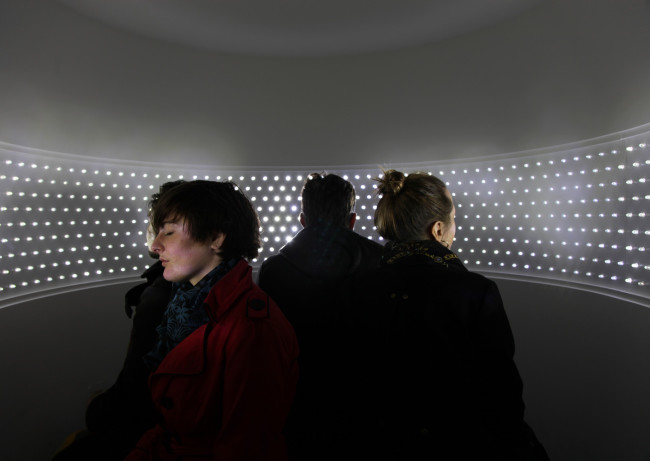 Ivana Franke: We Close our Eyes and See a Flock of Birds, 2013. Courtesy of the artist

The works of Ivana Franke, Tommi Grönlund, and Petteri Nisunen share an explorative approach which unites artistic methodology with natural sciences and architecture. The permeation of graphics, sculptures, architecture, movement, and sounds with mathematics, optics, physics, and neuroscience in their work leads us to experience sensations that seem to be outside of our sensory limitations. Furthermore, they approach their art as mechanisms that simultaneously produce and uncover limits of perception. The interdisciplinary nature of the exhibition connects to the history of the Museum of Contemporary Art: the neo-avantgarde movement New Tendencies, to which a part of the permanent setup of the museum is dedicated. In a search for a new artistic expression during a time of intensive penetration of technology into the everyday life of the 1960s and the 1970s, artists strived to create an “open work,” which incorporates the audience into its’ own creation, and which is a result of both artistic and scientific discoveries.

The exhibition Perceptual Drift (Galaxies in Mind) by Ivana Franke takes visitors on a journey through various levels of artistic exploration by analysing our visual and spatial perceptual thresholds. Starting with a complete visual relocation in a series of installations in dark spaces, leaning on bodily sensations in intentionally unstable optical conditions, it continues on to a series of objects and prints—models meant to exercise visual comprehension and awareness of invisible structures that comprise the image of the world, revealed through quasy-hallucinatory visual experiences in the observers minds. After the initiation path that starts as a complete dizziness, we move on to rational constructs and spatial speculations, and ultimately towards a conscious experience of vast unknown areas permeating our minds and the phenomenal reality.

In their synesthetic installations, Tommi Grönlund and Petteri Nisunen use forces invisible to the human eye, which create the world around us, reifying it through the materialisation of natural phenomena as like radioactivity, (electro) magnetism, gravity, standing wave patterns and randomness, among others. They use them as a scenario for the construction of impressive audio, kinetic, and optical installations, which take on the particularities of the exhibition spaces, thereby opening the possibility of endless site-specific adaptations. The works by Grönlund and Nisunen, as well as with space, enter a dialogue with the visitors of the exhibition—through sight, hearing, touch, and motion. Every sensation is open to personal perception, reflection, and, finally, randomness in terms of completely personal experience that leaves behind the limitations of everyday cognition.

Ivana Franke is a visual artist based in Berlin. In her works, she investigates the interface between perception, cognition and the environment, focusing on perceptual thresholds. Her most recent exhibition, Retreat into Darkness. Towards a Phenomenology of the Unknown, is currently on view at the Ernst Schering Foundation in Berlin. Other projects include Disorientation Station (11th Shanghai Biennale) and Seeing with Eyes Closed (Peggy Guggenheim, Venice, Deutsche Guggenheim, Berlin). She represented Croatia at the 52nd Venice Biennial with the solo exhibition Latency, and at the 9th Venice Architecture Biennial. Other exhibitions include Manifesta 7, and MoMa P.S.1.

Grönlund and Nisunen first met when studying architecture in the same university in late 80´s and they have worked together since early 90´s. Recently, they presented a mid-career retrospective of their collaborative work at the exhibition GREY AREA in Helsinki Kunsthalle, and had solo shows at the Galerie Anhava in Helsinki and the Esther Schipper Gallery in Berlin. Some of their most important group exhibitions include MUDAM Luxembourg, 5th Marrakech Biennale,Laboratorio Arte Alameda, 3rd Moscow Biennale, Yokohama Triennial and Manifesta 1. They represented Nordic countries at the 49th Venice Biennial and participated with a solo show at the 27th Sao Paolo Biennial.