NOWs: When You Touch About Me, I Think Myself. 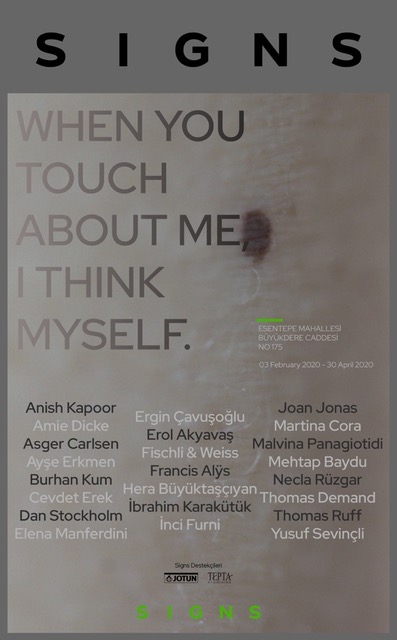 When You Touch About Me, I Think Myself.

SIGNS, Istanbul, a new platform for arts, is pleased to present its second group exhibition, titled When You Touch About Me, I Think Myself which can be seen between February 3-April 30, 2020.

In the exhibition, each of the works featured have been brought together inspired by thoughts on touch; the most primitive of all senses and at times most unclear to define the characteristics and the borders of. The palpable and tactile aspect of animate and inanimate beings and defined spaces assert one’s sense of self. The comfort of reaching out for a touch saves one from the eternal corridors of the void and the unending universe becomes altogether tangible, perceivable and equal to our physicality.

Skin, being that ubiquitous site of the act of touch, also becomes the undefined border between the self and the Other. It is undefined, since one can only touch another, by touching oneself first. Skin presents itself as a threshold defining an exterior and interior and it brings about questions on being the organ of touch or merely its medium. Passing along this thought, the exhibition moves on to discuss what that real organ of touch being situated farther inward could be, if any.

Tactility and thought, has been at odds since Antiquity with the hierarchical relation ascribed to them. While, touch is the most primal of senses possessed by all sentient beings, to think, is deemed as the highest faculty that belongs to solely the human. However, a causal relation attributed between the two have always made their connection significant.

The title of the exhibition suggesting an intermingling of touch and thought refers to the construction of an “I” within the realm of language and the Cartesian split of thought from the body. Philosopher Judith Butler’s unique consideration of how they are specifically separated through language has inspired the formation of the exhibition which doesn’t seek to offer a conclusion or a statement on their interconnectedness, but to open passageways on tact and thought through questions asked on their coexistence while communicating with the world, their lack, remnants, traces, results and relation to other sensory modalities.

SIGNS wishes to thank Tepta and Jotun for their valuable contributions to the exhibition.