NOWs: 4/10 –A CRITICAL INVENTORY OF THE IKOB COLLECTION 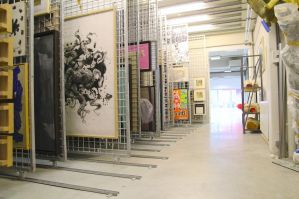 4/10 –A CRITICAL INVENTORY OF THE IKOB COLLECTION

With regard to the equal treatment of female and male artists, 2019 is apparently turning out to be a year of reappraisal at several art- and culture-institutions. For example, for twelve months starting this April the Tate Modern in London is exclusively featuring female artists from its own collection. Through a focus on works of art by women, which are exhibited percentage-wise far less frequently than those by men, female artists are to be more strongly represented and their contribution to art history is to be more appropriately acknowledged. There are also projects such as these outside the visual arts. Thus the Karlsruhe State Theatre is hiring only female directors for the 2018/19 season. The IKOB is likewise seeking to make its contribution to an endeavour that is actually long overdue. We engaged in a closer analysis of our collection and investigated the question as to how many works of art came from women and how many from men. It turned out that exactly 40% of the works in the collection were done by women. Four out of ten is not a bad ratio in comparison to other museums, whose percentage seems to be stuck at around 25%. In comparison, between 2009 and 2011 the share of works by female artists purchased by museums in North Rhine-Westphalia was no more than 28%, and only 22% of all solo exhibitions receiving financial support from that German state were by female artists. Why is this low percentage surprising? Because for decades the share of women at German art academies has been constantly over 60%; and with regard to the art prizes awarded by the state, there is at least an even distribution between women and men. But as soon as it is a matter of participation in exhibitions at galleries, museums and art associations, it is striking that women lag behind men with shocking regularity. If one then examines the list of the most commercially successful artists, it becomes evident that the number of top earners who are women continues to be infinitesimally small.

Since a reappraisal can only take place there where people are aware of this differentiation, the exhibition 4/10, A Critical Inventory of the IKOB Collection, constitutes the beginning of an endeavour to do justice to the female artists from our collection with regard to contents, and to support their contributions to the uniqueness of the (East-)Belgian art scene by bringing those creations to light. For that reason, the motto of the moment is ‘men into storage, women into the museum.

The exhibition is conceived as an invitation to communication: above all between the IKOB and the female artists represented in its collection, but also among visitors, both female and male, who have not seen many of these works of art for a long time or possibly never at all.