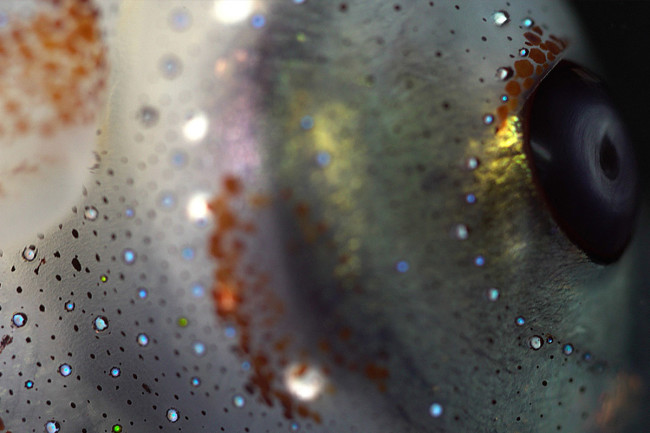 Andreas Greiner: Eye of the Hotaru Ika squid, still from Studies of an Alien Skin, 2016, photo by Paul Rohlfs

Algae light up in blue when touched; high-yield-varieties of chicken from fattening farms are bred with short, absurdly thick legs to support their heavy bodies; a squid in Japan glows at a depth of 300 meters to find a mate: these are the living organisms that make up the material in Andreas Greiner’s Living Sculptures. Instead of movements in the ocean, the algae react to the sounds of an automatic piano, as in the installation “From String to Dinosaurs” (2014), or they become, like the glowing squid, the protagonist of his video “Studies of an Alien Skin” (2016), where the artist shows the colorfully vibrant skin of the animal in near microscopic magnification. The music for the video composed by Tyler Friedman is an acoustic reproduction of the visible movements on the surface of the skin. For this work, they were both awarded the 2015 Conlon Music Prize for Disklavier Plus.

It is these wonderful, sometimes magical phenomena of nature in all their intriguing facets that Andreas Greiner first captures scientifically, and then translates into an artistic language to thus make them accessible to the viewer and, yes sometimes, to even celebrate them, as in the images of the squid.

Within the framework of scientific test arrangements, Andreas Greiner examines certain characteristics of living beings and transfers them into the context of art. Nature as the point of departure for his work and the scientific methodology as his artistic approach are combined in his works with a clear aesthetic position that does actually suggest the notion of a living sculpture.

As might be expected, there is in his work a concern for the living being itself, for the animal as part of our world. For “Studie (Porträt), Zur Singularität des Tieres” (2015), Andreas Greiner received the IBB Prize for Photography. In this work, he portrays four chickens: Heinrich, who is photographed in traditional semi-profile; Karl, with an X-ray of the skeleton; Elisabeth, who is represented by a DNA analysis, and Margarete, where he presents a histological section of her breast tissue. In allowing the animals to leave the anonymized field of living beings by naming them and applying traditional portrait formats, Andreas Greiner also criticizes the anthropocentric view that the value of nature results from its usefulness for humans, while clearly refusing his consent.

In “Monument für die 308”, he presents a skeleton of a chicken eight meters in height (the hybrid chicken Ross 308, created after 308 crossbreeding experiments). It serves to preserve the memory of the tortured creature, optimized by continuous breeding for faster and larger meat growth and for the living conditions in factory farming. The transfer of the skeleton to a monumental scale using a 3D printer is an artistic act. To the viewer, its result might hardly be recognizable as a chicken, but rather be identified as a dinosaur such as in a Natural History Museum. In its November 18 issue, the FAZ newspaper interviews the American writer Jonathan Franzen about his penchant for birds, and he substantiates his love for these animals with the eternal wonder that they are among the oldest creatures on Earth. It is, he says, as if I am looking at a flying dinosaur. From dinosaurs to high-performance chicken: Andreas Greiner’s work constitutes an aesthetic, moral and scientific examination. Last but not least, it is also about the question of the creation of life – as an artist and also as a scientist.

Andreas Greiner, born 1979 in Aachen, initially studied medicine and, after his Physikum, he switched to the field of art. He concluded his studies in 2013 as a master student of Olafur Eliasson. He lives and works in Berlin and, in 2016, was awarded the GASAG Art Prize, combined with an exhibition at Berlinische Galerie. In addition to his own work, he works in the artist collective “Das Numen”. Andreas Greiner has realized a new work for this exhibition. A film about cell growth combines with a composition by Icelandic composer Páll Ragner Pálsson to form an installation, which will be premiered on the evening of the opening preview with Tui Hirv (vocals), Nanna Koch (violin) and Tinna Thorsteinsdottir (piano). 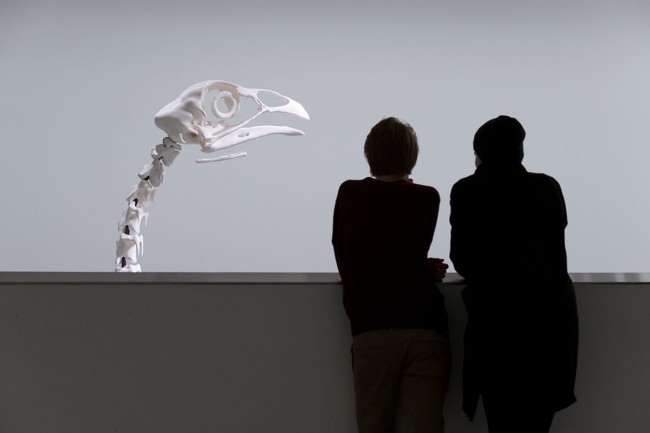