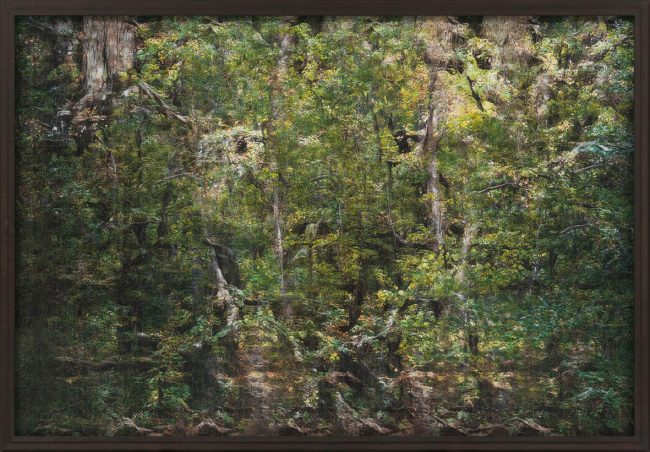 In Andreas Greiner’s work, there is no contradiction between art and science. His multi-media, multi-disciplinary practice includes time-based living and digital sculptures, photographs, and video works that chart complex concerns and expose vital issues in contemporary society, including environmental and ecological challenges. In the exhibition Jungle Memory, Greiner recreates nature, representing his research into endangered forests in Germany and Poland.

Greiner probes the relationship between ecology and technology. Amid a simulated forest and light scenario that transforms the main gallery space, Greiner presents a large-format video work made with the aid of artificial intelligence. A dataset comprising several thousand photographs that Greiner shot in the ancient Hambacher Forst and Białowieża forests was fed into a digital calculus to derive the idea of a forest. In processing the pictures, the artist created generated recollections or algorithmic projections of an abundant and unruly nature whose romantic flair is unmistakable. The resulting images are layered and morphed together to create a cinematic dance of trees, bright and illusionary yet concerning and oddly foreboding of a post-human world. A sound composition accompanies the installation.

Paralleling the abstractions on the four-square-meter LED screen and the sound piece, Greiner premieres a video in the first room. A two-channel video, created in collaboration with Paul Rohlfs, is presented on screens (purchased second-hand) that are connected to a central control box. In addition, the screens display archival quotes from texts on the economic or protective vision of silviculture, and a video illustrating the current process of natural dynamic reforestation. The video shows how the death of old spruce trees at the hands of the bark beetles allows the forest to regenerate, making it versatile and resilient. […]

The exhibition can be read as a cognitive and emotional collage that highlights, through a concrete local example, the interdependence of historical factors, economic decisions and climate change. Taking as a starting point the catastrophic situation of the forests of the Harz (a highland region in Lower Saxony), the works address an immediate reality that is tied as much to past centuries’ silviculture as to contemporary global ecological choices.

With Jungle Memory, Greiner probes the question whether, in our age of climate change and the mass extinction of species, the language of art is actually capable of adequately articulating these concerns. The passages above are excerpts from an essay that Bernard Vienat contributed for the gallery catalogue, which will be published in September 2020 and available at the gallery and via the online shop.